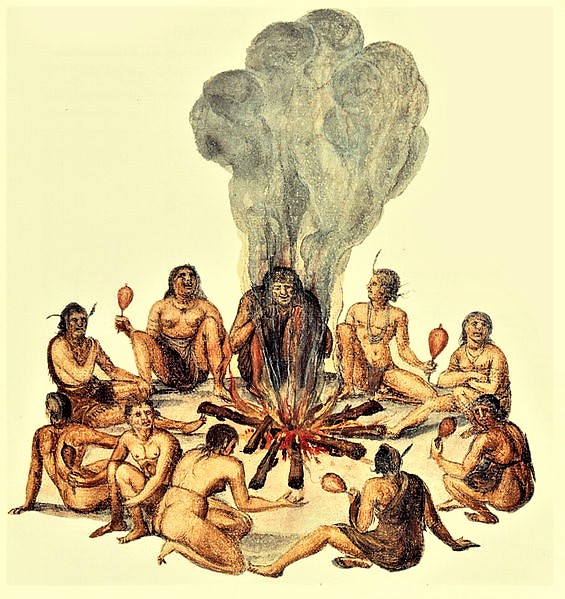 Such is the belief upon which their medical practice is based, & whatever we may think of the theory it must be admitted that the practice is consistent in all its details with the views set forth in the myth. Like most primitive people the Cherokees believe that disease & death are not natural, but are due to the evil influence of animal spirits, ghosts, or witches. Haywood, writing in 1823, states on the authority of two intelligent residents of the Cherokee nation:

In ancient times the Cherokees had no conception of anyone dying a natural death. They universally ascribed the death of those who perished by disease to the intervention or agency of evil spirits & witches & conjurers who had connection with the Shina (Anisgi´na) or evil spirits.... A person dying by disease & charging his death to have been procured by means of witchcraft or spirits, by any other person, consigns that person to inevitable death. They profess to believe that their conjurations have no effect upon white men.

Extracted from:   The Sacred Formulas of the Cherokees.  Seventh Annual Report of the Bureau of Ethnology to the Secretary of the Smithsonian Institution, 1885-1886,  Government Printing Office, Washington, 1891.  Recorded by James Mooney (1861-1921) was an American ethnographer who lived for several years among the Cherokee.
Posted by Barbara Wells Sarudy at 4:00 AM

Inside, looking out to the past & asking why...

Blogging is a joy - a total extravagance, a chance to explore endless curiosities. Searching for WHY human society changes & what those living before us declare in their own words & in their design & images of themselves & of the world around them.

Search this blog for artists, places, events, people, or any other expansive or tiny topic