The Crow Creek Massacre occurred around the mid 1300s AD between Native American groups at a site along the Missouri River in the South Dakota area; it is now within the Crow Creek Indian Reservation. Two groups occupied the site in prehistoric times. The Siouan-speaking Middle Missouri people, ancestral to the historic Mandan people, 1st occupied the site sometime after about 900 AD. They built numerous earth lodges on the lower portion of the site. Caddoan-speaking Central Plains people (Initial Coalescent variant) moved into the area from southern areas (present-day Nebraska) sometime around 1150 AD. (The historic Arikara are a Caddoan people.) Whether they displaced the earlier group or moved onto an abandoned site is unknown. The Central Plains (Initial Coalescent) people built at least 55 lodges, mostly on the upper part of the site.

There is evidence that the Central Plains/Initial Coalescent villagers built well-planned defensive works for their village. They were replacing an earlier dry moat fortification with a new fortification ditch around the expanded village when an attack occurred that resulted in the massacre. The attacking group killed all the villagers. In 1978 state archaeologists found the remains of at least 486 people killed during the attack. Most of these remains showed signs of ritual mutilation, particularly scalping. Other examples were tongues being removed, teeth broken, beheading, hands & feet being cut off, & other forms of dismemberment. In addition to the severity of the attack, most of the people showed signs of malnutrition & many had evidence of being wounded in other attacks. Scholars have theorized that the people were attacked by another group or several groups of the Initial Coalescent culture in the area in competition for arable land & resources.

Scalping & Mutilation
Many of the bodies are missing limbs; the attackers may have taken them as trophies, scavenger animals or birds may have carried them away, or some limbs may have been left unburied in the Crow Creek village. Investigators state that "they had been killed, mutilated, & scavenged before being buried." Tongue removal, decapitation, & dismemberment of the Crow Creek victims occured, In addition, scalping was performed, bodies were burned, & there is evidence of limbs being removed by various means. A conservative estimate of villagers who suffered scalping is 90%, but it could have been as high as 100%. This is based on skeletal remains that exhibit cuts on their skulls indicative of scalping. Men, women, & children were scalped. 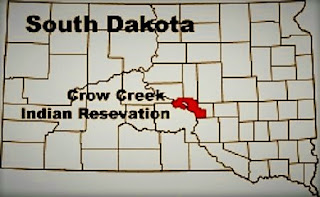 Nutritional deficiencies
The villagers' skeletal remains provide evidence of extensive nutritional deficiencies of a chronic nature. The Crow Creek villagers were measured as being shorter than their Arikara descendants, with the females being significantly shorter; this could have been another effect of nutritional deficiencies & illness. The severe conditions faced by the Crow Creek villagers were not short term. Based on the evidence of "active & organizing subperiostial hematomas along with the other bony alterations" found while examining remains, the villagers had long suffered malnutrition, in repeated episodes thought due to the unstable climate & drought reducing crops & food supplies. The presence of animal bones within the fortification ditch suggests that villagers ate their dogs because of hunger.

Signs of previous warfare
The skeletal remains of the villagers also showed evidence of earlier wounds. Evidence of previous warfare is present in the skeletal remains of victims found in the mass burial. Two individuals had survived previous scalping incidents, & were in the process of healing, which was indicated by the bony re-growth of their skulls; a third individual had survived a head injury as indicated by "a healed depressed fracture in the frontal." Others showed evidence of being wounded by arrows, the points of which remained in the legs & were overgrown by bone.
Posted by Barbara Wells Sarudy at 4:00 AM

Searching for WHY human society changes & what those living before us declare in their own words and in their design & images of themselves & of the world around them. Posting on the worldwide internet makes history less intimidating, easily accessible, & freely available for everyone.
As a historian, I must rely on archaeologists, using a variety of scientific tools, to find & help explain earlier evidence beyond that obvious on the surface. Science is not truth. It is a process in the pursuit of truth.
Honored to have you here. Welcome!
Barbara Wells Sarudy

Blogs by B W Sarudy - Just click on the title