In 1599, as retaliation for the killing of 11 Spanish soldiers, Juan de Oñate led punitive expedition to slaughter the natives at the Acoma mesa. 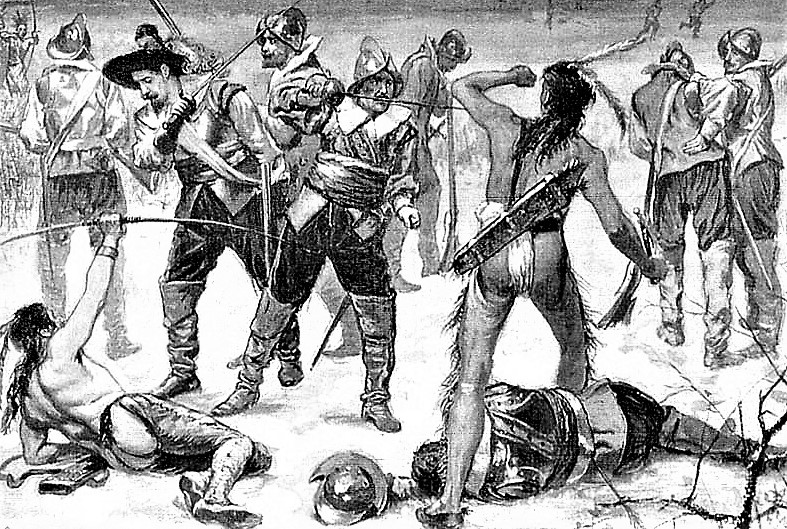 In the late 1500s, the Spanish began their conquest of the Pueblo people in northern New Spain & in 1595 the conquistador Don Juan de Oñate was granted permission from King Philip II to colonize Santa Fe de Nuevo México, the present-day New Mexico. Relations between the Spanish & the Acoma people had been mostly peaceful for several decades after the 2 groups first came into contact around 1540.

In 1598, the Acoma leader, Zutacapan, learned that the Spanish intended to conquer Acoma Pueblo. Initially, the natives planned to defend themselves; however, their belief that the Spanish were immortal & their knowledge of Spanish atrocities committed in the past led the Acoma to try to negotiate a peaceful solution to the conflict. Accordingly, Don Oñate sent his nephew, Captain Juan de Zaldívar, to the pueblo to consult with Zutacapan. When Zaldivar arrived on December 4, 1598, one of the first things he did was to take 15 of his men up the mesa on which the pueblo was located to demand food from the natives. After being denied the food they had demanded, the Spaniards allegedly attacked some Acoma women. A fight ensued, leaving Zaldivar & eleven of his men dead.

When Oñate learned of the incident, he ordered Juan de Zaldivar's brother, Vicente de Zaldívar, to lead an expedition to punish the Acoma & set an example for other pueblos. Taking about 70 men, Vincente de Zaldivar left San Juan Pueblo in late December or early January & arrived at Acoma Pueblo on January 21, 1599.

The battle began the following morning, January 22. For the first 2 days the Spanish & Acoma skirmished inconclusively until Zaldívar developed a plan to breach the pueblo using a small cannon. On the third day, Zaldívar & 12 of his men ascended the mesa & opened fire on the pueblo with the cannon. After some time, several Acoma homes caught on fire & were destroyed while the conquistadors stormed through the settlement. There were an estimated 6,000 natives living at or around the Acoma Pueblo in 1599, at least 2,000 of whom were warriors. Of the 2,000, about 500 were killed in the battle, along with about 300 women & children. Some 500 prisoners were taken & later sentenced to a variety of punishments. Don Oñate ordered that every male above the age of 25 would have his right foot cut off & be enslaved for a period of 20 years. However, only 24 men actually received amputations. Males between the age of 12 & 25 were also enslaved for 20 years along with all of the females above the age of 12. Many of these natives were dispersed among the residences of government officials or at Franciscan missions. Sixty of the youngest women were deemed not guilty & sent to Mexico City where they were "parceled out among Catholic convents". Two Hopi men were taken prisoner at the pueblo; after each had one of his hands cut off, they were released to spread the word of Spain's resolve.

When King Philip heard the news of the massacre, & the punishments, Don Oñate was banished from New Mexico for his cruelty towards the natives & later returned to Spain to live out the remainder of his life. Several Acomas escaped capture by the Spanish in 1599 & by 1601 they had rebuilt their pueblo, which still stands.
Posted by Barbara Wells Sarudy at 4:00 AM

A Note from the Author Barbara W Sarudy

Searching for WHY human society changes & what those living before us declare in their own words and in their design & images of themselves & of the world around them. Posting on the worldwide internet makes history less intimidating, easily accessible, & freely available for everyone.
As a historian, I must rely on archaeologists, using a variety of scientific tools, to find & help explain earlier evidence beyond that obvious on the surface. Science is not truth. It is a process in the pursuit of truth.
Focusing mostly on the history & art of gardens & women, I put together several blogs, different in the particulars but similar in the essentials. They are listed in the blogroll below.
Honored to have you here -Welcome!